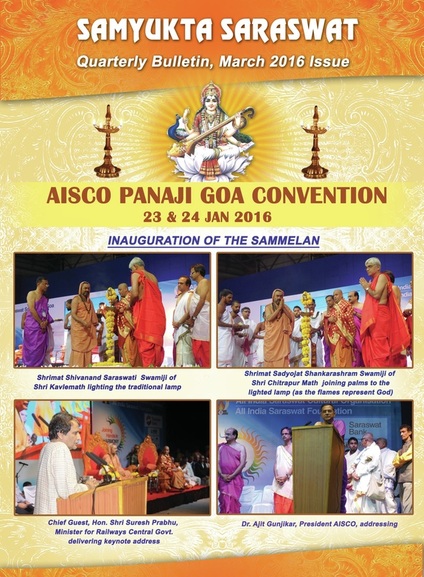 The two day National  Convention in Panaji Goa, organised by All India Saraswat Cultural Organisation, Mumbai (AISCO) at Dr.Shyam Prasad Mukherji Stadium Taleigao near Panaji, on Saturday the 23rd and Sunday the 24th  Jan., 2016 went  off very well with more than 1500 Saraswat delegates participating from  all over the country. To many of them the visit to Goa was very sentimental as their forefathers, forsaking everything including their home and  hearth had to leave Goa some 450 years ago being unable to  bear the atrocities committed by the then rulers of Goa, the Portuguese, in the name of religion.

It was indeed a  very rare occasion as two of the Saraswat Guru Maharajas, H.H.Shrimat Sadyojat Shankarashram Swamiji of Shri Chitrapur Math and  H.H.Shrimat Shivananda Saraswati Swamiji of Shri Kaivalya Math, in the presence of various dignitaries to mark the auspicious beginning of the  Convention,  lighted a huge lamp to the  accompaniment of vedic chants by the priests and vedic scholars on the colourful dais that was fully decorated.

The Chief Guest, Union Railway Minister, Hon.Shri Suresh Prabhu, in his inaugural address made it point to tell the audience  of the glorious past our country Bharat has and the  rich contribution made by Saraswat Community as a whole  towards the history and culture besides the  economy from time to time with a spirit of service  to the society and also the nation as a whole…Goa should be a symbol of unity and emotional attachment for every Saraswat and that  he must  visit the land of his ancestors…

In his  welcome address, Dr. Ajit Gunjikar, President, AISCO stated that  we  the  Saraswats once lived on the banks of the  ancient River Saraswati,  migrated to other  parts of the country and after a long time we  speak different languages but that  should  not divide us and our origin should  bond us together as Indians and at the same time Saraswats with glorious past of which we can always  take pride and todays huge gathering here  under the banner of Saraswats  amply proves it with the slogan  of “Joining Hands in Harmony”

In their benedictory  blessings, H.H.Shrimat Shivanand Saraswati Swamiji of Shri Kavlemath was pleased to declare that  it was really a great occasion  of joining hands in harmony to interact, share and help each other to grow together as one community, that is Saraswats.  H.H.Shrimat Sadyojat Shankarashram Swamiji of Shri.Chitrapur Math after recalling that the first Vishwa Saraswat Sammelan was held in 1999 and that the very thought of joining hands in harmony should be the guiding factor and the essence of this convention. Shri Swamiji, as usual sang a ‘bhajan’ devoutly, asking all the delegates to join and the audience gladly followed Shri Swamiji like one single
person.

At the beginning of the Inauguration, both the Swamijis were honoured, respected and worshipped with Padya Pooja by the AISCO office-bearers. Then a two minute silent prayer was offered in memory of H.H.Shrimat Sudhindra Tirth  Swamiji of Shri Kashi Math Samsthan, who became immortal on 17th Jan., 2016. It was also recalled that Shri Swamiji was a pillar of strength to the AISCO from the day one.

During the inaugural session around 40 celebrities in different walks of life from different parts of the country were honoured. A novel in English by Shri K.G.Mallya, was released hy H.H.Shri Kavale Math Swamiji. The name of the novel is “Pilgrims  from Goa” touching upon the exodus of our forefathers from Goa in the 15th Century.

With this the  inaugural session  came to an end and in the after-noon after lunch, business sessions started.
(Reports for each session follow separately. Input by Shri K. G. Mallya, Editor Samyukta Saraswat, AISCO )